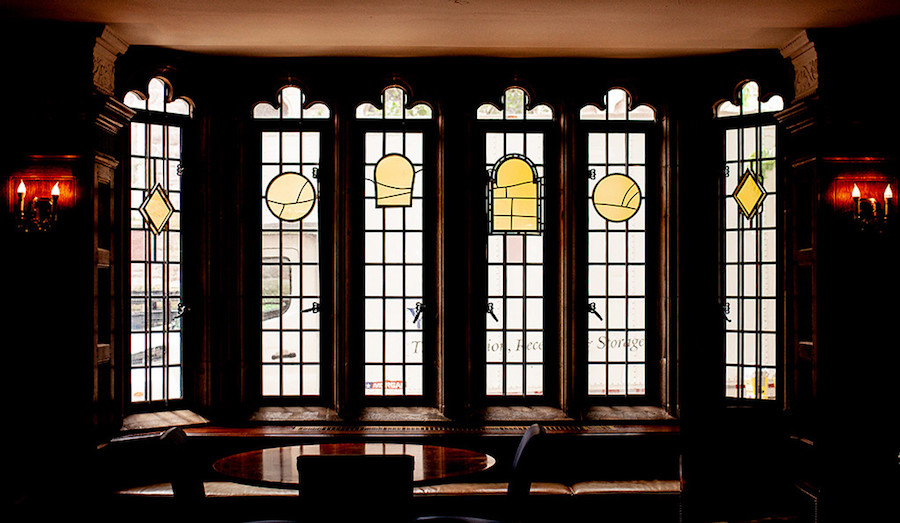 Ringgold’s designs will replace six stained-glass panels that commemorated the life of John C. Calhoun 1804 B.A., 1822 LL.D, the college’s former namesake and an influential champion of slavery and white supremacy.

Anoka Faruqee ’94 B.A., who chaired the committee overseeing the project, explained that Ringgold’s expertise in using art to confront the nation’s history of race relations made her an ideal choice for the commission — the first of two projects in Hopper College. A second project, yet to be commissioned, will create five new windows for the college’s Roosevelt Thompson ’84 Dining Hall.

“In her long and distinguished career as an artist and activist, Faith Ringgold has demonstrated a commitment to visual storytelling as a means to reflect on our shared history and community,” said Faruqee, an artist and director of graduate studies in painting and printmaking at the Yale School of Art. “The committee was impressed by Ringgold’s ability to integrate symbolism and specificity, as well as the clarity of her subject matter, color, and compositions. We’re delighted that she accepted the commission.”

“The windows will depict the full range of student life from academics to extracurricular activities,” she said, adding that the display likely will include a tribute to Grace Murray Hopper ’30 M.A., ’34 Ph.D., a pioneering computer scientist and mathematician. “They will express the unique function of Yale’s residential colleges as spaces where all kinds of extracurricular activities flourish.” 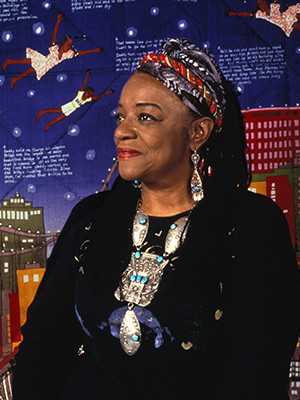 Ringgold, who was born in Harlem in 1930, has worked in a variety of media — including painting, quilting, performance art, and sculpture — over an artistic career spanning more than 50 years. Her influential and diverse career has included work made in response to American racism.

While teaching art in the New York City public schools during the 1960s, she began a series of paintings called “American People” inspired by the civil rights movement. In the 1980s, she embarked on projects using the medium of the “story quilt,” which is rooted in African American communal traditions of quilting and storytelling. One of her best-known works from this period, “1988 Tar Beach” (Part I from the Woman on a Bridge Series), is in the permanent collection of the Solomon R. Guggenheim Museum.

Ringgold also has produced numerous public art works, including “Flying Home: Harlem Heroes and Heroines” for the Metropolitan Transit Authority’s 125th Street subway station in Harlem; “For the Women’s House” for the Rose M. Singer Center on Rikers Island; and The Crown Heights Children’s History Quilt at Public School 22 in Brooklyn, New York. Since the 1990s, she has written and illustrated many acclaimed children’s books. Among them is “Tar Beach,” which was a Caldecott Honor Book and a recipient of the Coretta Scott King Award.

Julia Adams, the head of Hopper College and a member of the windows committee, said Ringgold’s preliminary designs are well suited to the function of the college’s common room, which she called a “vibrant focal point of student life.”

“The common room is both a crossroads and a gathering space,” said Adams, a professor of sociology and international & area studies. “It’s a place through which students pass but also linger. They play music together there. They study. They relax. I know they’ll be excited by this news.”

Adams recalled reading Ringgold’s book “Tar Beach” to her son when he was a little boy.

“I love her work,” she said. “I love her sense of color. She is a passionate, vibrant, and wonderful artist.”

The six windows in the common room and five located in the central bay of the dining hall were replaced with amber-tinted temporary panes in the summer of 2016. The move occurred after an employee at the college used a broomstick to knock out a dining hall window that depicted enslaved people in a cotton field. The replaced windows are now housed at the Yale University Library’s Manuscripts & Archives Department, where they are available for research.

The Hopper College Window Commission Committee was formed in the spring of 2017 and charged with recommending an artist or artists to create new windows for the common room and dining hall. The 11-member committee, which includes four undergraduates from the college, compiled and reviewed a list of 50 nominees for the work, Faruqee said.

“We decided early on to create two different commissions — one for the common room and another for the dining hall,” she said. “We concluded that the two spaces are used differently and that the windows in them serve different purposes.”

While the common room’s window bay presents a “blank canvas,” the dining hall windows must be integrated with the theme of the room’s existing windows, which celebrates the flora and fauna of the American South, Faruqee explained.

The committee has selected three finalists for the dining hall commission, who will be invited to spend time on campus and develop their proposals, she said.

The common room commission is divided into two phases: The first is a design phase and the second will involve fabricating Ringgold’s final vision onto glass.

“Moving forward, we are offering feedback on her preliminary designs, which she will incorporate in a revision, and then we will enter the fabrication phase,” Faruqee said. “Faith will work closely with the fabricators to realize her vision. It is inevitable that when you move from an opaque medium to a translucent one, the work will evolve.”

The project should be completed in about a year, she said. More information about Ringgold’s career and examples of her work are available on her website.