The Coat of Arms

Grace Murray Hopper’s accomplishments and qualities of character offer rich opportunities for visualization, and for representing the College’s transformation. The blue of the shield reflects the colors of Yale and of the U.S. Navy, where Hopper rose to the rank of Rear Admiral. The dolphin – thought of in the early days of heraldry as the ‘sovereign’ and ‘guiding light of the sea’ – represents Hopper’s exemplary personal and professional record of leadership. The ‘semé’ of white circles and vertical rectangles – evoking zeros and ones in this case – recognizes her contributions to mathematics and computer science. The scalloped bar at the top of the design gestures at waves or horizon, and links the College’s visual history to the patterns and colors of a new time.

The above is the plain English wording, the heraldic rationale, of the shield’s symbols and design. 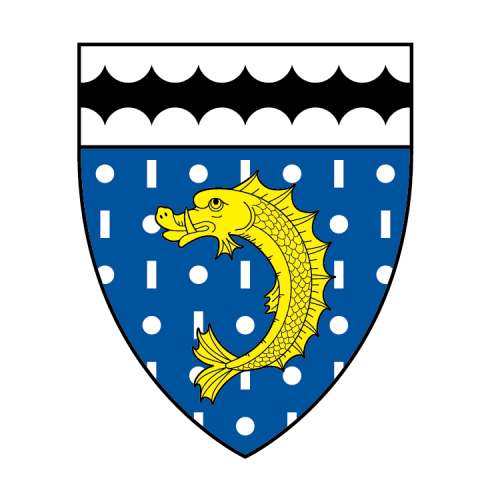 Azure semé of Plates and Billets Argent a Dolphin embowed Or; on a Chief Argent a Fess engrailed Sable

Word order in blazon usually follows the patterns of the French language. Heraldry took root in England (and throughout Europe) at about the same time as the Norman Invasion. The first “armigers” in England were French nobility and their English allies and collaborators.

The general color of the shield comes first—Azure

This is followed by a description of any modification of that background, in this case a repeating pattern that extends beyond the border of the shield—semé (meaning seeded)

This is followed by a description of the element(s) (charges) with which the field is seeded—plates (silver circles) and billets (vertical rectangles, also silver, that may originally have signified folded paper stationery or blocks of wood)

Argent confirms the colors of these charges, though the term plates technically incorporates that color

The primary charge, a dolphin, is listed last in this section to indicate that it is placed over all

Embowed describes the posture of the dolphin—a reverse c-shape. Sea creatures have their own series of heraldic postures. The fact that the dolphin faces to its own right is conventional. Were it to face its own left, the blazon would read embowed sinister

Or establishes the tincture of the dolphin, gold

Argent establishes that the field of the chief is silver. Whenever silver is specified it is almost always rendered as white

A Fess is a horizontal bar

Engrailed is the heraldic term that specifies the particular form of scalloping that’s applied. These embellishments seldom have any explicit symbolic significance, but are tacitly evocative. In this case, in addition, this pattern creates a connection to the saltire engrailed of the Calhoun coat of arms.

Sable establishes the black tincture of the fess

The College owes particular thanks to three people:

He worked closely with Stephen Scher, TD ’56, Phd ’66 (History of Art) to develop the Grace Hopper shield, drawing upon Stephen’s extensive knowledge of heraldry. Stephen is retired, but served as guest curator at the Frick Collection for the current exhibition “The Pursuit of Immortality: Masterpieces from the Scher Collection of Portrait Medals.” He received the Yale Medal in 2015.

Jonathan Corum, CC/GH ’95 (Art and East Asian Studies) produced final artwork from Gambell and Scher’s preliminary sketch. He serves as science graphics editor at The New York Times. Jonathan Corum designed the metal College shields that decorate the west exterior wall of the Apple Store in New Haven. His website, 13pt.com, features many of his projects, including work that he produced as a student at Yale.